I’ve know since the early days of my faith that Matthew contained a section often referred to as the Kingdom Parables….that sound so wonderful, but as I read this chapter again today it strikes me that this is another passage that our pastors today will likely stay away from. Who wants to be offended or told that the purpose of the parables was to hide the truth.

I will make a couple of brief comments on the sections below in the text.
Audio: https://www.biblegateway.com/audio/mclean/kjv/Matt.13

The Parable of the Sower

Mat 13:2  And great multitudes were gathered together unto him, so that he went into a ship, and sat; and the whole multitude stood on the shore.

Mat 13:3  And he spake many things unto them in parables, saying, Behold, a sower went forth to sow;

Mat 13:4  And when he sowed, some seeds fell by the way side, and the fowls came and devoured them up:

Mat 13:5  Some fell upon stony places, where they had not much earth: and forthwith they sprung up, because they had no deepness of earth:

Mat 13:6  And when the sun was up, they were scorched; and because they had no root, they withered away.

Mat 13:7  And some fell among thorns; and the thorns sprung up, and choked them:

Mat 13:8  But other fell into good ground, and brought forth fruit, some an hundredfold, some sixtyfold, some thirtyfold.

The implication is that some, perhaps many will not be able to hear.

Gill proposes it as a way to spur those who do hear on to understand.

Who hath ears to hear, let him hear. Not externally only, but internally; he that has ears given him to hear, so as to understand, let him make use of them, and seriously consider of, and diligently attend to the use and importance of this parable. It is a way of speaking used by Christ, when anything of moment was delivered, and not so easy to be understood, on purpose to quicken the attention of his auditors, and stir up in them a desire of understanding what was said; which effect this had upon his disciples; see Mar 4:10.

The Purpose of the Parables

Mat 13:10  And the disciples came, and said unto him, Why speakest thou unto them in parables?

Mat 13:11  He answered and said unto them, Because it is given unto you to know the mysteries of the kingdom of heaven, but to them it is not given.

Jesus will say that again in other words at other times.

Mat 13:13  Therefore speak I to them in parables: because they seeing see not; and hearing they hear not, neither do they understand.

This doesn’t seem to be an inviting message. A better way to look at it is to grasp the following verses and think of our Bibles as being the Word of God which they are….and their purpose as John writes is to draw us into Jesus’ inner circle of friends, disciples, chosen, elect, etc. that he explains the true meaning of the says to, so that we do have clear understanding.

Joh 20:31  But these are written, that ye might believe that Jesus is the Christ, the Son of God; and that believing ye might have life through his name.

The Parable of the Sower Explained

Mat 13:18  Hear ye therefore the parable of the sower.

Note: It seems in all cases these points focus on the word (of God), and there are three risks: not understanding, tribulation and persecution, and the care(s) of this world and deceitfulness of riches.

And of course the wicked one, Satan is behind all of this….just as he was in the garden.

Mat 13:19  When any one heareth the word of the kingdom, and understandeth it not, then cometh the wicked one, and catcheth away that which was sown in his heart. This is he which received seed by the way side.

Mat 13:20  But he that received the seed into stony places, the same is he that heareth the word, and anon with joy receiveth it;

Mat 13:21  Yet hath he not root in himself, but dureth for a while: for when tribulation or persecution ariseth because of the word, by and by he is offended.

Mat 13:22  He also that received seed among the thorns is he that heareth the word; and the care of this world, and the deceitfulness of riches, choke the word, and he becometh unfruitful.

Mat 13:23  But he that received seed into the good ground is he that heareth the word, and understandeth it; which also beareth fruit, and bringeth forth, some an hundredfold, some sixty, some thirty.

The Parable of the Weeds

Mat 13:24  Another parable put he forth unto them, saying, The kingdom of heaven is likened unto a man which sowed good seed in his field:

Mat 13:25  But while men slept, his enemy came and sowed tares among the wheat, and went his way.

Mat 13:26  But when the blade was sprung up, and brought forth fruit, then appeared the tares also.

Mat 13:27  So the servants of the householder came and said unto him, Sir, didst not thou sow good seed in thy field? from whence then hath it tares?

Mat 13:28  He said unto them, An enemy hath done this. The servants said unto him, Wilt thou then that we go and gather them up?

Mat 13:29  But he said, Nay; lest while ye gather up the tares, ye root up also the wheat with them.

Mat 13:30  Let both grow together until the harvest: and in the time of harvest I will say to the reapers, Gather ye together first the tares, and bind them in bundles to burn them: but gather the wheat into my barn.

Jesus turns to two positive parables…interestingly, this is a positive reference much like a good sourdough bread…a strange theme to be reading just after Passover, when we are tasked to remove the leaven! 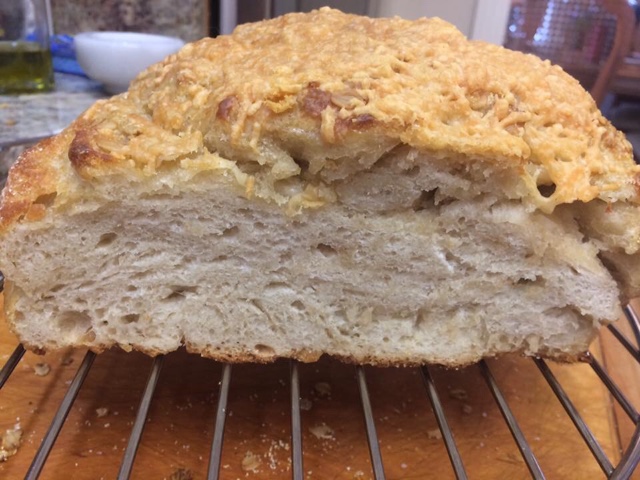 The Mustard Seed and the Leaven

Mat 13:31  Another parable put he forth unto them, saying, The kingdom of heaven is like to a grain of mustard seed, which a man took, and sowed in his field:

Mat 13:32  Which indeed is the least of all seeds: but when it is grown, it is the greatest among herbs, and becometh a tree, so that the birds of the air come and lodge in the branches thereof.

Mat 13:33  Another parable spake he unto them; The kingdom of heaven is like unto leaven, which a woman took, and hid in three measures of meal, till the whole was leavened.

Mat 13:34  All these things spake Jesus unto the multitude in parables; and without a parable spake he not unto them:

Mat 13:35  That it might be fulfilled which was spoken by the prophet, saying, I will open my mouth in parables; I will utter things which have been kept secret from the foundation of the world.

Perhaps this was the original and ultimate form of WikiLeaks? The Good News is we have God’s word revealing this to us.

Joh 18:36  Jesus answered, My kingdom is not of this world: if my kingdom were of this world, then would my servants fight, that I should not be delivered to the Jews: but now is my kingdom not from hence.

Joh 18:37  Pilate therefore said unto him, Art thou a king then? Jesus answered, Thou sayest that I am a king. To this end was I born, and for this cause came I into the world, that I should bear witness unto the truth. Every one that is of the truth heareth my voice.

The Parable of the Weeds Explained

Mat 13:36  Then Jesus sent the multitude away, and went into the house: and his disciples came unto him, saying, Declare unto us the parable of the tares of the field.

Mat 13:37  He answered and said unto them, He that soweth the good seed is the Son of man;

Mat 13:39  The enemy that sowed them is the devil; the harvest is the end of the world; and the reapers are the angels.

Mat 13:40  As therefore the tares are gathered and burned in the fire; so shall it be in the end of this world.

Mat 13:41  The Son of man shall send forth his angels, and they shall gather out of his kingdom all things that offend, and them which do iniquity;

Mat 13:42  And shall cast them into a furnace of fire: there shall be wailing and gnashing of teeth.

Mat 13:43  Then shall the righteous shine forth as the sun in the kingdom of their Father. Who hath ears to hear, let him hear.

So if we have read the above Jesus adds a couple more parables to again spur us on to grabbing on to thi truth.

The Parable of the Hidden Treasure

Mat 13:44  Again, the kingdom of heaven is like unto treasure hid in a field; the which when a man hath found, he hideth, and for joy thereof goeth and selleth all that he hath, and buyeth that field.

The Parable of the Pearl of Great Value

Mat 13:45  Again, the kingdom of heaven is like unto a merchant man, seeking goodly pearls:

Mat 13:46  Who, when he had found one pearl of great price, went and sold all that he had, and bought it.

The Parable of the Net

Mat 13:47  Again, the kingdom of heaven is like unto a net, that was cast into the sea, and gathered of every kind:

Mat 13:48  Which, when it was full, they drew to shore, and sat down, and gathered the good into vessels, but cast the bad away.

Mat 13:49  So shall it be at the end of the world: the angels shall come forth, and sever the wicked from among the just,

Mat 13:50  And shall cast them into the furnace of fire: there shall be wailing and gnashing of teeth.

Not exactly what today’s preachers are preaching in the welcoming, seeker friendly church, perhaps it’s ok that they don’t lead with this passage. But Jesus thought it appropriate to at least pass on the message to his disciples and to us in their written word.

Mat 13:51  Jesus saith unto them, Have ye understood all these things? They say unto him, Yea, Lord.

Mat 13:52  Then said he unto them, Therefore every scribe which is instructed unto the kingdom of heaven is like unto a man that is an householder, which bringeth forth out of his treasure things new and old.

Mat 13:53  And it came to pass, that when Jesus had finished these parables, he departed thence.

Mat 13:54  And when he was come into his own country, he taught them in their synagogue, insomuch that they were astonished, and said, Whence hath this man this wisdom, and these mighty works?

Mat 13:55  Is not this the carpenter’s son? is not his mother called Mary? and his brethren, James, and Joses, and Simon, and Judas?

Mat 13:56  And his sisters, are they not all with us? Whence then hath this man all these things?

In this passage we see how large Jesus’ family actually grew to since his birth….at lease 6 brothers and sisters. We have no reason to doubt all birthed of Mary and Josepth, since they are mentioned in vs 55.

In other places the gospel is considered offensive.

Joh 6:61  When Jesus knew in himself that his disciples murmured at it, he said unto them, Doth this offend you?

Mat 13:57  And they were offended in him. But Jesus said unto them, A prophet is not without honour, save in his own country, and in his own house.

Mat 13:58  And he did not many mighty works there because of their unbelief.