It became obvious to me a few years ago that in my retirement I should try my hand at Bread.

Sounded like a good endeavor considering Jesus said to us:

Except for those with wheat allergies, it seemed like a good idea to pursue bread. So it was decided that the old packet of Alaska Sourdough starter our daughter had given me years ago would be tested to see if it could be resurrected.

1Co 15:12  Now if Christ be preached that he rose from the dead, how say some among you that there is no resurrection of the dead?

1Co 15:13  But if there be no resurrection of the dead, then is Christ not risen:

1Co 15:14  And if Christ be not risen, then is our preaching vain, and your faith is also vain.

So after a few years of keeping my starter on the shelf, I found it was alive and started sharing it with a few family and friends. Both as starter, and Bread and Pizza.
So now, I am writing to give you the inside scope.
There is much to read on Sourdough on the Web so I will refer you to that for your own research.
What I have to say is hopefully encouraging. Many are frightened by Sourdough.
Remember Sourdough is not Rocket Science….It existed before the Internet, even before the Printing Press, and of course before we males were allowed in the kitchen!
My advice is just do it.
YOU do have to follow the basic week long process of establishing a starter.
See either the attached link or book for a process to get started…or seek out a real Sourdough Friend.
BTW: My wife and I are official Sourdoughs having completed the Chilkoot Trail this summer.
I pick up from there…
I keep my starter batch in the refrigerator. And I use it mostly for homemade pizza and large bread loaves.
It’s as simple as taking out the batch,
I usually use 1 cup.
If you have left it for some extended time pour the grey liquid off before starting.
Immediately refresh with a cup of flour and water, I use equals, but you can play with the mix.
After stiring the refreshed mix I leave it sit out over night to work it’s thing and then put back in the refigerator.
The cup I took out, I mix with warm water maybe another cup and a little sugar, and a bit of yeast…I think it rises better with some yeast….others say it overpowers the sour flavor…so play with this yourself. I’ve used as little at 1/4 t and as much as 1 T.
I wisk this all up and let it sit 15-20 minutes.
Then I put all in my mixer and add the flour and any additional water.
For Bread I use this receipe:
http://www.instructables.com/id/Sourdough-Bread/?ALLSTEPS

It works for me so I don’t need to change it.
I actually don’t have the covered pan so I just use an old deep cast iron skillet.
Works fine. Cover it with a lid as best you can.
I also spray with water…and lately I’ve been spraying with Bragg’s to enhance the sourness.
http://www.goodreads.com/book/show/292307.Apple_Cider_Vinegar
Also a baker told me to you can jump the sourflavor by adding a teaspoon or two of sour salts.
I spray often and use both Cornmeal and Oats on the pan bottom.
On the top I also sprinkle a layer of Oats and Sesame or Sunflower Seeds, and a bit of Kosher Salt.
And for the last 5-10 minutes I often sprinkle some parmesan cheese on top.
That’s all I do.
Oh, one other note, this is important start yestarday….you really need to let the dough cure overnight.
Same is true for my pizza dough.
Pizza dough..
You can start by checking out.
STAGE THREE: Making the Dough
on my Kindle Location 2309 in 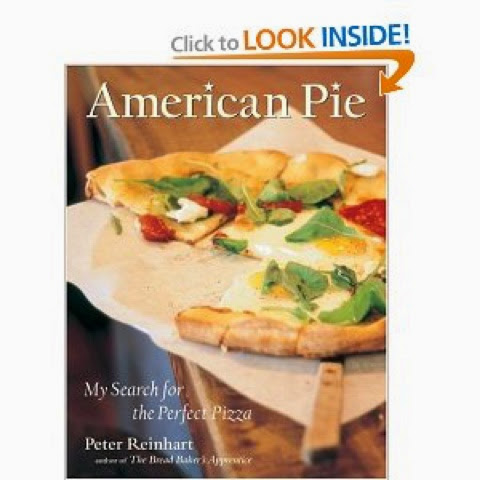 But basically, I use the same approach.
1 cup of starter, a bit of sugar some yeast, maybe a bit of sour salts after the process gets started.
1 cup of warm water.
Wisk and wait.
Put mix in mixer, add a T or so of good olive oil, t of kosher salt. and maybe around 3 cups of flour.
Now this is also important for Pizza I learned to use a good 00 flour.
I’m currently using… 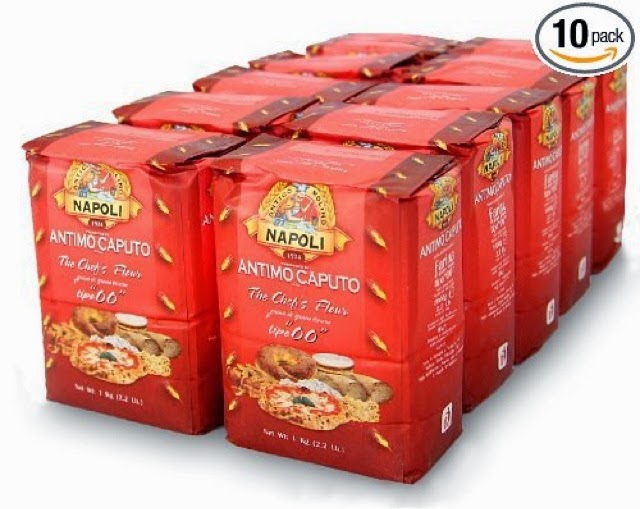 Not cheap but well worth it. If you have a good domestic source let me know.
I also add a but of gluten, with all the gluten free diets now there is a glut in the market for that.
It helps the stretch.
I don’t do much, hence the no rocket science comment.
Just kneed in my mixer for a good while, I like it just a bit moist, and not sticking to the sides.
I place it on plastic wrap….I oil the wrap a bit with EVO and then refrigerate overnight.
Take it out about 4-5 hours before making the pizza.
When you are ready – divide and roll.
I roll it out on a Cornmeal flour mix.
For my taste my motto is “Thinner is Better“
I like a thin crispy crust.
I found it is best to prebake the crust 2-3 minutes on my stone at 500deg…higher would be better but that is all my owen will handle.
The side I put down on the stove I like to coat with EVO. Beware of smoke, but it helps to crisp the crust.
Prebaking makes the crust much more manageble when you start to add the toppings.
So back out of the oven, the crust is ready, keep it top side up.
Oil this side also with EVO, to seal the top and keep the tomato sauce from leaching into the dough.
The toppings are up to you. And although I love lots of stuff….I find that now “Less is Better”, if you put too much on, it just doesn’t cook crispy enough in the center of the dough.
Anyway this is your choice.
The final cooking takes 5-8 minutes maybe more if you have piled on the toppings.
The crust should be hard like a cracker and make a sound if you break it.
Let rest a few minutes on a drying rack and cut and eat.
A few other ideas….a bit more good EVO on the finished pizza is a plus.
And in making the original crusts some times I vary it by, rolling out the crust very thin, then folding it over on itself 3-4 times…and rerolling. Ofter this will make the crust bubble and flake.
One can also try braiding the edge if you like a deeper crust at the rim of the dough. If you do this be sure to oil the bottom before you braid it.
And my favorites: Sundried Tomatoes, Feta and Anchovies
(plus is you get to eat all your pizza!)
Homemade Pesto Sauce.
Smoked Salmon or Lox
Good luck and enjoy. 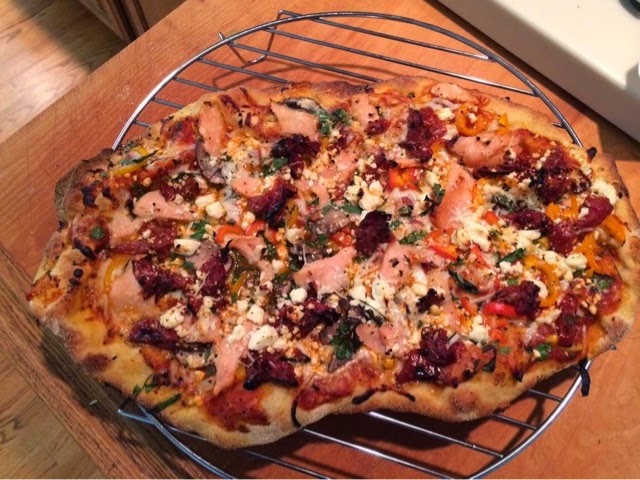 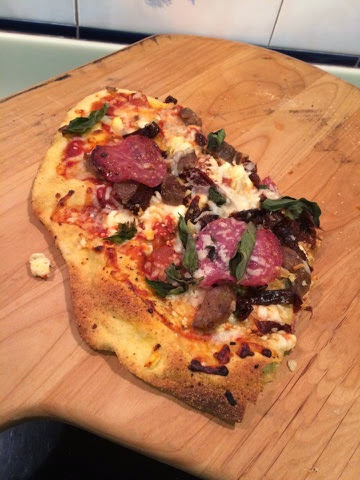