Matthew 7:14  Because strait is the gate, and narrow is the way, which leadeth unto life, and few there be that find it. 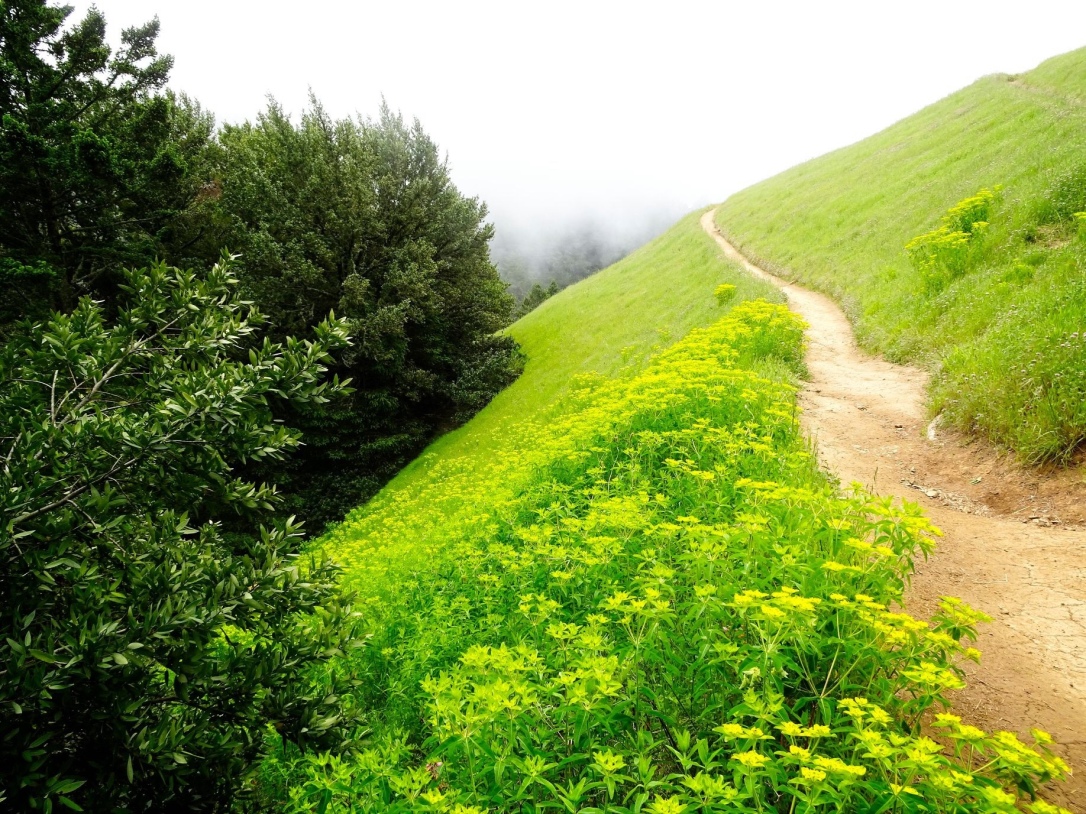 Sometimes we can’t see the end destination on the narrow way, and it may even appear to lead into the fog.

As you read the following passage think about just who it was that came to Jesus…”one of the scribes”. Jesus will later say…

Mark 12:38  And he said unto them in his doctrine, Beware of the scribes, which love to go in long clothing, and love salutations in the marketplaces,

So his impression of them is not favorable…this is even more strongly worded in Matthew beginning with:

Matthew 23:13  But woe unto you, scribes and Pharisees, hypocrites! for ye shut up the kingdom of heaven against men: for ye neither go in yourselves, neither suffer ye them that are entering to go in.

But here we see Jesus actually answered him. And the first thing he said was actually the more primary summary of not of the commandment list in Exodus 20, but the Great Shema from Deuteronomy 6:4-5. See John Gill’s excellent commentary below..

And finally notice Jesus’ conversation with him captured in v32-34 these are indeed kind words to a scribe….. he was most likely one actually on the narrow way.

Mar 12:28  And one of the scribes came, and having heard them reasoning together, and perceiving that he had answered them well, asked him, Which is the first commandment of all?

Mar 12:29  And Jesus answered him, The first of all the commandments is, Hear, O Israel; The Lord our God is one Lord:

Mar 12:31  And the second is like, namely this, Thou shalt love thy neighbour as thyself. There is none other commandment greater than these.

Mar 12:32  And the scribe said unto him, Well, Master, thou hast said the truth: for there is one God; and there is none other but he:

Mar 12:34  And when Jesus saw that he answered discreetly, he said unto him, Thou art not far from the kingdom of God. And no man after that durst ask him any question.

Jesus answered him, the first of all the commandments is,…. Christ replied at once, without taking any time to consider of it, that the chief and principal of all the commands of the law, and what is of the greatest importance is,

hear, O Israel, the Lord our God is one Lord. The Vulgate Latin, and Arabic versions read, “one God”; but the Syriac, and Ethiopic render it, “one Lord”; and that rightly, agreeably to the Greek text, and to Deu 6:4, from whence this is taken. This passage of Scripture, to the end of the ninth verse, is the first of the sections which were put into their phylacteries; See Gill on Mat 23:5; and was repeated twice every day, morning and evening; which is by the Jews called from the first word קריאת שמע, “the reading of the Shema”: concerning the exact time of the reciting of this, morning and evening, and of the posture in which they do it, reclining in the evening, and standing in the morning, and of the prayers before and after it, various rules are given in their Misna (p), or oral law; it is a precept of great esteem and veneration with them, and attended to with much solemnity. The account Maimonides (q) gives of it is this:

And it is observable, that the last letter of the word “hear”, and the last of the word “one”, are both written in very large characters in the Hebrew Bible, to denote the greatness of the command, and to cause attention to it. The Jews seek for mysteries in these letters, and think the unusual size of them, points at some very great things: they observe, that the first of these letters is numerically “seventy”, and directs to the seventy names of the law, and the seventy ways in which it may be interpreted, and the seventy nations of the world, from whom the Israelites are distinguished, by their belief of the one God (r); and that the latter stands for the number “four”, and shows that the Lord is the one God, in heaven and in earth, in all the world, and in the four parts of it; and that both these letters put together, make a word, which signifies “a witness”; showing that this passage is a glorious testimony of the unity of God, and that the Israelites are witnesses of it, by believing and professing it; and that should they depart from the faith of it, God would be a witness against them: and now, though there is no solid foundation for such interpretations, yet this shows what an opinion they had of the greatness of this command; to which, may be added, they ask (s),

The sense is, that he must first make a confession of his faith in God, which is contained in Deu 6:4 and then he must obey his commands; so that they plainly considered this, as the first and greatest of all. These words are frequent in the mouths of the modern Jews, in proof of the unity of God, and against a plurality in the Deity; but the ancient ones, not only consider them as a good and sufficient proof, that there is but one God, but as expressive of a Trinity in the Godhead: with a view to this text they observe (t), that

“Jehovah, “our God, Jehovah”; these are, תלת דרגין, “three degrees” (or persons) with respect to this sublime mystery, “in the beginning, God”, or “Elohim, created”, &c.”

“there is an unity which is called Jehovah the first, our God, Jehovah; behold! they are all one, and therefore called one: lo! these three names are as one; and although we call them one, and they are one; but by the revelation of the Holy Ghost it is made known, and they are by the sight of the eye to be known, that “these three are one”, (see 1Jn 5:7,) and this is the mystery of the voice that is heard; the voice is one; and there are three things, fire, and wind, and water, and they are all one, in the mystery of the voice, and they are not but one: so here, Jehovah, our God, Jehovah, these, תלתא גוונין, “three modes, forms”, or “things”, are one.”

“there are two, and one is joined to them, and they are three; and when they are three, they are one: these are the two names of hear, O Israel, which are Jehovah, Jehovah, and Elohenu, or our God, is joined unto them; and it is the seal of the ring of truth.”

To which I shall subjoin one passage more, where R. Eliezer is asking his father R. Simeon ben Jochai, why Jehovah is sometimes called Elohim, he replies (x), among other things;

“come see, there are גדרגין, “three degrees”, (or persons,) and every degree is by itself; although they are all one, and bound together in one, and one is not separated from another.”

To believe this, is the first and chief commandment in the law, and is the principal article of the Christian faith; namely, to believe that there is one God, and that there are three persons, Father, Son, and Spirit, in the Godhead.