The ESV Study bible has the best map that shows how central Ephesus was to the old world. 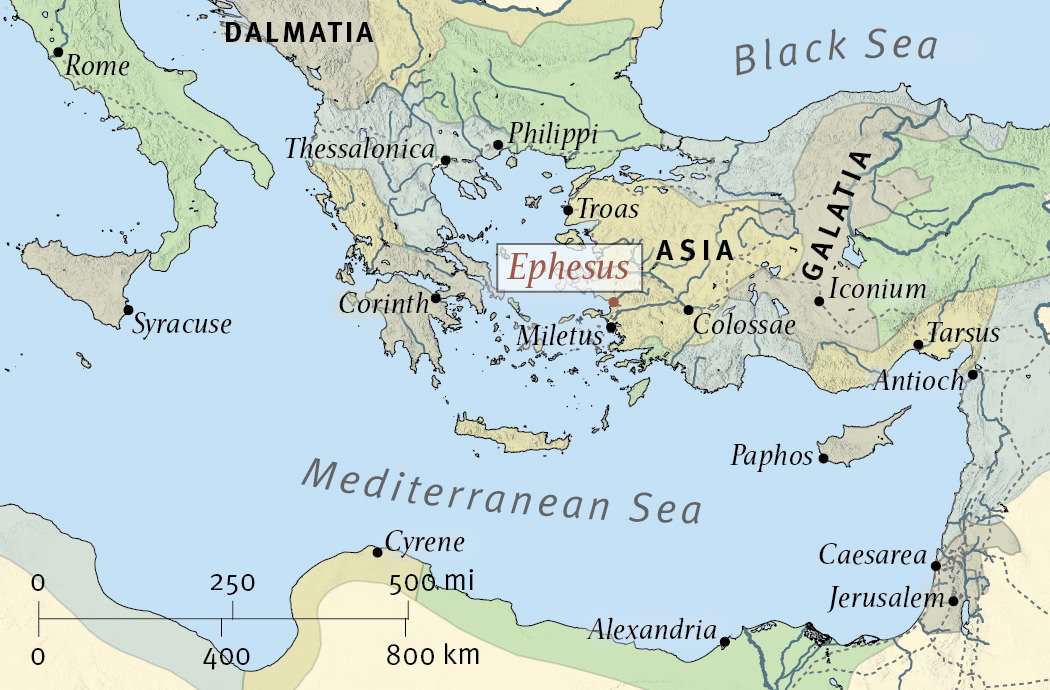 It was so important that it was the first of the seven churchs mentioned in the Book of Revelation.

To the Church in Ephesus

Rev 2:1  Unto the angel of the church of Ephesus write; These things saith he that holdeth the seven stars in his right hand, who walketh in the midst of the seven golden candlesticks;
Rev 2:2  I know thy works, and thy labour, and thy patience, and how thou canst not bear them which are evil: and thou hast tried them which say they are apostles, and are not, and hast found them liars:
Rev 2:3  And hast borne, and hast patience, and for my name’s sake hast laboured, and hast not fainted.
Rev 2:4  Nevertheless I have somewhat against thee, because thou hast left thy first love.
Rev 2:5  Remember therefore from whence thou art fallen, and repent, and do the first works; or else I will come unto thee quickly, and will remove thy candlestick out of his place, except thou repent.
Rev 2:6  But this thou hast, that thou hatest the deeds of the Nicolaitans, which I also hate.
Rev 2:7  He that hath an ear, let him hear what the Spirit saith unto the churches; To him that overcometh will I give to eat of the tree of life, which is in the midst of the paradise of God.

But that was written by John around 90AD, perhaps we can infer from these earlier accounts what some of the troubles that they would encounter were that Paul warned about.

Act 20:17  And from Miletus he sent to Ephesus, and called the elders of the church.

Act 20:27  For I have not shunned to declare unto you all the counsel of God.
Act 20:28  Take heed therefore unto yourselves, and to all the flock, over the which the Holy Ghost hath made you overseers, to feed the church of God, which he hath purchased with his own blood.
Act 20:29  For I know this, that after my departing shall grievous wolves enter in among you, not sparing the flock.
Act 20:30  Also of your own selves shall men arise, speaking perverse things, to draw away disciples after them.
Act 20:31  Therefore watch, and remember, that by the space of three years I ceased not to warn every one night and day with tears.

2Ti 4:1  I charge thee therefore before God, and the Lord Jesus Christ, who shall judge the quick and the dead at his appearing and his kingdom;
2Ti 4:2  Preach the word; be instant in season, out of season; reprove, rebuke, exhort with all longsuffering and doctrine.
2Ti 4:3  For the time will come when they will not endure sound doctrine; but after their own lusts shall they heap to themselves teachers, having itching ears;
2Ti 4:4  And they shall turn away their ears from the truth, and shall be turned unto fables.
2Ti 4:5  But watch thou in all things, endure afflictions, do the work of an evangelist, make full proof of thy ministry.

For the time will come,…. This is a reason of the solemn charge above given: the time referred to was future, when the apostle wrote, but quickly came on; and the characters of it have appeared more or less in all ages since; and in none more than in ours:

when they will not endure sound doctrine; the Gospel which contains the wholesome words of Christ, and is sound itself, having no corruption in it, and salutary in its effects to the souls of men; and yet such is the depravity of some men, both in principles and practice, that they cannot receive it, nor bear to hear it, turn their backs on it, express their indignation at it, and treat it not only with neglect, but with ridicule and contempt:

BTW Gill writes of the Ephesians losing their first love with these words.

because thou hast left thy first love: by which is meant, not hospitality to strangers, or an affectionate care of the poor of the church, or a zealous concern to feed the flock, and maintain church discipline;

but the love of the saints to God, and Christ, and one another, which appeared at the beginning of this church state, when they were all of one heart and one soul, as generally at first conversion love is the warmest; and so it was at the first planting of Gospel churches, and therefore here called first love.

Now this, though it was not lost, for the true grace of love can never be lost, yet it was left; it abated in its heat and fervour; there was a remissness in the exercise of it; what our Lord had foretold should be before the destruction of Jerusalem was fulfilled in this period of time, the love of many waxed cold, Mat 24:12; through the prevalence of corruption in some; and through an over love to the world, as in Demas, and others;

and through a desire of ease and freedom from reproach and persecution; and through the introduction of errors, which damp the heat of love, and spirit of religion; and through the contentions and divisions among themselves, as at Corinth, Galatia, and elsewhere, which greatly weakened their love to one another, and to divine things; and which was very displeasing to Christ, who, for the restoring of them, gives the following advice. Compare with this 2Ti 1:15.

2Ti 1:15  This thou knowest, that all they which are in Asia be turned away from me; of whom are Phygellus and Hermogenes.

This thou knowest, that all they which are in Asia,…. Either those that followed the apostle from Asia to Rome; or who came from thence thither, upon business, and were upon the spot when the apostle was in his greatest troubles, and yet all forsook him and no man stood by him; or else the churches and ministers in Asia, that is, a great number of them; for it cannot be said of every minister and church, and of all the members of churches there, what follows,

be turned away from me; were ashamed of him, because of his chain, and despised him under his afflictions, and had him in abhorrence and contempt, and revolted from his doctrine; though the defection was very general, and the apostle appeals to Timothy for the truth of it, as a fact well known to him: “this thou knowest”; Timothy being at Ephesus, which was in Asia; and since there was so great an apostasy in the country where he was, the above exhortations were very seasonable, to hold fast the form of sound words, and keep the good thing committed to him; seeing so many were falling off from the truth of the Gospel:

of whom are Phygellus and Hermogenes: who very likely were ministers of the word, and who had shone for a while, but were now stars fallen from heaven, had erred from the faith, and were become apostates, and proved men of corrupt minds, and deceivers of the people; and it may be that these were more open and infamous than some others, or might be more known to Timothy, and therefore are particularly mentioned. They are both of them said to have been of the seventy disciples; See Gill on Luk 10:1 and afterwards followers of Simon Magus. The name of the first of these signifies a “fugitive”, and such was he from the cause of Christ. Pliny (c) makes mention of a town in Asia, called Phygella, from the fugitives which built it; and the latter signifies born of Mercury; there was one of the name in Tertullian’s time, against whom he wrote.