Luke concludes the book of Acts with this account of Paul entering and preaching in Rome. 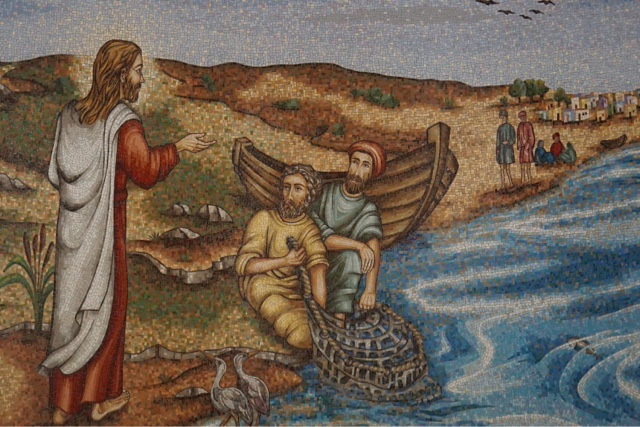 In my 10 Lists reading if I follow the full schedule I will read this book on the lunar 28 day cycle. Curiously, that topic came up this week a couple of times as we were observing the full moon, and someone asked whether it always occurred at Passover.
We know the Jewish calendar is based on the same cycle and that the sacrifice of the lamb occurs on the 14th day,,,,,,, just before the sundown and the beginning of the Passover.
It’s just this easy…the Jewish months begin on the new moon….the full moon occurs 1/2 through the 28 day cycle…I.e. The 14th day. So yes always at the time of Passover.
The Easter cycle is somewhat tied to this also, but a bunch of church rules are overlaid in it’s actual determination which I will not get into…..but their purpose is get Easter on the first Sunday after the first full moon after the spring equinox…you can read about it here in this brief article.
http://www.rayfowler.org/writings/articles/determining-the-dates-for-easter-and-passover/
Btw this can get a lot more confusing and over laid with a lot of false teaching if you read too much about process. Just stick to the Bible!

Exo 12:1  And the LORD spake unto Moses and Aaron in the land of Egypt, saying,

Exo 12:2  This month shall be unto you the beginning of months: it shall be the first month of the year to you.

Exo 12:3  Speak ye unto all the congregation of Israel, saying, In the tenth day of this month they shall take to them every man a lamb, according to the house of their fathers, a lamb for an house:

Exo 12:4  And if the household be too little for the lamb, let him and his neighbour next unto his house take itaccording to the number of the souls; every man according to his eating shall make your count for the lamb.

Exo 12:5  Your lamb shall be without blemish, a male of the first year: ye shall take it out from the sheep, or from the goats:

Exo 12:6  And ye shall keep it up until the fourteenth day of the same month: and the whole assembly of the congregation of Israel shall kill it in the evening.

Exo 12:7  And they shall take of the blood, and strike it on the two side posts and on the upper door post of the houses, wherein they shall eat it.

(Since this is after sun down,  it’s really now the 15th day)

Exo 12:9  Eat not of it raw, nor sodden at all with water, but roast with fire; his head with his legs, and with the purtenance thereof.

Exo 12:11  And thus shall ye eat it; with your loins girded, your shoes on your feet, and your staff in your hand; and ye shall eat it in haste: it is the LORD’S passover.

So back to Acts 28. I’ll highlight two verses…with themes repeated throughout scripture. The audio is a great listen.

Act 28:22  But we desire to hear of thee what thou thinkest: for as concerning this sect, we know that every where it is spoken against.

Act 28:23  And when they had appointed him a day, there came many to him into his lodging; to whom he expounded and testified the kingdom of God, persuading them concerning Jesus, both out of the law of Moses, and out of the prophets, from morning till evening.

Act 28:31  Preaching the kingdom of God, and teaching those things which concern the Lord Jesus Christ, with all confidence, no man forbidding him.

Paul certainly was making His Case for Christ. But as we see in v24-27 not all believed.

Even Jesus himself was not believed when he spoke and ministered directly:

Joh 6:64  But there are some of you that believe not. For Jesus knew from the beginning who they were that believed not, and who should betray him.

Joh 6:65 And he said, Therefore said I unto you, that no man can come unto me, except it were given unto him of my Father.

Joh 6:66  From that time many of his disciples went back, and walked no more with him.

So the question is as we ponder this year’s Passover week and the crucifixion and resurrection, will we answer like Peter?

Joh 6:67  Then said Jesus unto the twelve, Will ye also go away?

Joh 6:68  Then Simon Peter answered him, Lord, to whom shall we go? thou hast the words of eternal life.

Joh 6:69  And we believe and are sure that thou art that Christ, the Son of the living God.

Act 28:1  And when they were escaped, then they knew that the island was called Melita.

Act 28:2  And the barbarous people shewed us no little kindness: for they kindled a fire, and received us every one, because of the present rain, and because of the cold.

Act 28:3  And when Paul had gathered a bundle of sticks, and laid them on the fire, there came a viper out of the heat, and fastened on his hand.

Act 28:4  And when the barbarians saw the venomous beast hang on his hand, they said among themselves, No doubt this man is a murderer, whom, though he hath escaped the sea, yet vengeance suffereth not to live.

Act 28:6  Howbeit they looked when he should have swollen, or fallen down dead suddenly: but after they had looked a great while, and saw no harm come to him, they changed their minds, and said that he was a god.

Act 28:7  In the same quarters were possessions of the chief man of the island, whose name was Publius; who received us, and lodged us three days courteously.

Act 28:8  And it came to pass, that the father of Publius lay sick of a fever and of a bloody flux: to whom Paul entered in, and prayed, and laid his hands on him, and healed him.

Act 28:9  So when this was done, others also, which had diseases in the island, came, and were healed:

Act 28:10  Who also honoured us with many honours; and when we departed, they laded us with such things as were necessary.

Act 28:11  And after three months we departed in a ship of Alexandria, which had wintered in the isle, whose sign was Castor and Pollux.

Act 28:12  And landing at Syracuse, we tarried there three days.

Act 28:13  And from thence we fetched a compass, and came to Rhegium: and after one day the south wind blew, and we came the next day to Puteoli:

Act 28:14  Where we found brethren, and were desired to tarry with them seven days: and so we went toward Rome.

Act 28:15  And from thence, when the brethren heard of us, they came to meet us as far as Appii forum, and The three taverns: whom when Paul saw, he thanked God, and took courage.

Act 28:16  And when we came to Rome, the centurion delivered the prisoners to the captain of the guard: but Paul was suffered to dwell by himself with a soldier that kept him.

Act 28:17  And it came to pass, that after three days Paul called the chief of the Jews together: and when they were come together, he said unto them, Men and brethren, though I have committed nothing against the people, or customs of our fathers, yet was I delivered prisoner from Jerusalem into the hands of the Romans.

Act 28:18  Who, when they had examined me, would have let me go, because there was no cause of death in me.

Act 28:19  But when the Jews spake against it, I was constrained to appeal unto Caesar; not that I had ought to accuse my nation of.

Act 28:20  For this cause therefore have I called for you, to see you, and to speak with you: because that for the hope of Israel I am bound with this chain.

Act 28:21  And they said unto him, We neither received letters out of Judaea concerning thee, neither any of the brethren that came shewed or spake any harm of thee.

Act 28:22  But we desire to hear of thee what thou thinkest: for as concerning this sect, we know that every where it is spoken against.

Act 28:23  And when they had appointed him a day, there came many to him into his lodging; to whom he expounded and testified the kingdom of God, persuading them concerning Jesus, both out of the law of Moses, and out of the prophets, from morning till evening.

Act 28:25  And when they agreed not among themselves, they departed, after that Paul had spoken one word, Well spake the Holy Ghost by Esaias the prophet unto our fathers,

Act 28:26  Saying, Go unto this people, and say, Hearing ye shall hear, and shall not understand; and seeing ye shall see, and not perceive:

Act 28:28  Be it known therefore unto you, that the salvation of God is sent unto the Gentiles, and that they will hear it.

Act 28:29  And when he had said these words, the Jews departed, and had great reasoning among themselves.

Act 28:30  And Paul dwelt two whole years in his own hired house, and received all that came in unto him,

Act 28:31  Preaching the kingdom of God, and teaching those things which concern the Lord Jesus Christ, with all confidence, no man forbidding him.