As a prelude to final publication I wanted to pull together all my posts on The Quantum Theory of Lost Objects and an experimental proof of the existence of temporal Wormholes. If you see any remaining spelling or grammar errors please let me know in the comments. (Updated: 9/17/2021 I corrected a few.)

I continue testing the theory. The latest was a definitive example of the possible spacial aspect of the Wormhole.

An extensive search was made for Aunt Rosemary’s green jacket which disappeared immediate after Erica’s wedding in early July. Initially, it was recovered at the Whitehouse Inn in their room in Skagway, but then was drawn into the Wormhole somewhere between Erica’s house on Alaska Avenue, carry on baggage bins of Alaska Airlines, and the Mendenhall  Glacier outside of Juneau.

Since all these are well know places in Alaska, I had to look into the possibility causal effects due to low sunspot activity, and the related impact on The Northern Lights phenomenon. This proved to be a Rathole (not to be confused with a Wormhole), as this was mid-summer and no Northern Lights could be observed.

Extensive searching also took place in our home here in Northern California and at Tahoe. For three months to be specific. After all searching had ended, and while I was investigating a green spinach salad which had mysterious been left for almost a week on one of our living room end tables, I discovered the lost jacket in a box under the table.

I will attach a picture just to confirm it’s recovery. 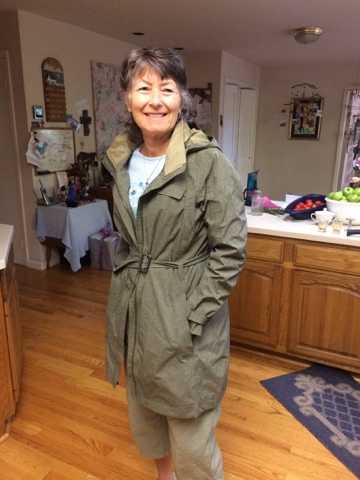 Again there appears to be no aging to the jacket due to it’s time in the Wormhole. Nor is there believed to be any spacial displacement that occurred (I.e. Lost in Alaska Recovered in California), that hypothesis is eliminated as we are most certain we brought the jacket ourselves when we returned home. It only entered the Wormhole here at our house.

Addendum: In addition to getting this article published in the peer review journal, someone suggested I submit it to Readers Digest….or perhaps the New York Times.

Because of the high frequency of Wormhole effects occurring at our house, I am in the process of applying for Federal Grant to conduct further study. A modest multi year grant of $3-5 million appears to be most desirable. (In 2021, I’ve raised the amount to $20-30 million and included in the Infrastructure Bill Proposal). I am current calling for grant writers who wish to assist in this project, salary to be commiserate with the position, to be paid as a negotiated percentage of approved grant funding.

Someone also suggested that I apply either to the Gates or Clinton Foundations. So if you have connections to either of these let me know.

My original research as documented on Facebook reported the following.

I have been encouraged by my colleagues to publish a scientific paper in Quantum Physics. Since most of you don’t subscribe I will briefly outline the latest documented research I have on my Quantum Theory of Lost Objects.

Not long ago I raised to certain colleagues the situation described below. Soliciting their help in the research project.

Looks like mom and I are due to buy all new backpacking equipment for 2016.

I can’t seem to find most of our primary equipment…including, MSR Water Gravity Filter, pocket rocket, cook pots, light weight tarp and our two Aircore mats…and whatever else maybe also lost…I’ve looked 3-4 times now for them.

Anyway all was last seen on our two day trip with Rainer in 2015….so there is a chance that there is a large box at Tahoe, but I have not seen it materialize yet since last summer, but maybe as we clear out summer stuff it will slow up….

Unless  we loaned all this stuff to someone, I just can’t remember…..

Anyway I we have our packs and sleeping bags but that is all.

And a bunch of old stuff that needs to be recycled.

Any suggestions on the best light-weigh new replacements are welcomed, but keep your eyes out for a big box of stuff floating around in the Wormhole.

After hours of searching and research here and at Tahoe, the matter was concluded…..

The Intergalactic Quantum Time Space Wormhole, reopened this morning……a large unlabeled pink storage box re-entered our universe, despite deep space time travel for over 10 months, our equipment appears to have hardly aged at all.

By the way, this may have something to do with mom’s prayer study group being here yesterday, but we have no evidence that they prayed for these items, unless she did so in secret.

Rom 8:26  Likewise the Spirit also helpeth our infirmities: for we know not what we should pray for as we ought: but the Spirit itself maketh intercession for us with groanings which cannot be uttered.

Again thanks for your diligent searching, but as we know it is impossible to find lost things once they move into the future.

I look forward to seeing the peer-reviewed article in the next volume of “Quantum Physics”. This last piece of evidence should clinch your theory. Be sure to list me as contributor as the tenure committee likes cross-discipline collaboration.

To which I have appended this footnote.

Yes quite conclusive, I will need to formally write this up, this was a rare event as the box is quite large, normal occurrences are limited to small items, like headphones, keys , etc. and in fact we are still missing the Canon battery charger, perhaps all that energy was need in the displacement of the box and it’s return. The green SUV is missing also, but I think Leslie borrowed it!

I may try publishing on Facebook first, as they have higher readership.

Comments on my Theory still seem to be limited.

The application of the theory to lost objects seems to be ignored.

Although unproven, I am looking into the hypothesis that the energy needed to initially open the wormhole is related to desire and need, with the  corollary that the more intense the need, the further an object can be transported into the future.

Also note that it is almost certain that objects return to the exact same location they were originally at, (this is why the obvious key question in finding lost items is: Where did you have it last?!). There seems to be no clear evidence of spacial displacement, unless associated with parallel moveable items like keys lost in a purse. This opens the whole idea of temporal movement of wormholes, but that is another project.

If you have read this post, consider yourselves part of my peer review group, and your own retesting, corrections and comments are appreciated.

For other uses, see Wormhole (disambiguation).

For a simplified notion of a wormhole, space can be visualized as a two-dimensional (2D) surface. In this case, a wormhole would appear as a hole in that surface, lead into a 3D tube (the inside surface of a cylinder), then re-emerge at another location on the 2D surface with a hole similar to the entrance. An actual wormhole would be analogous to this, but with the spatial dimensions raised by one. For example, instead of circular holes on a 2D plane, the entry and exit points could be visualized as spheres in 3D space.

“Embedding diagram” of a Schwarzschild wormhole (see below) 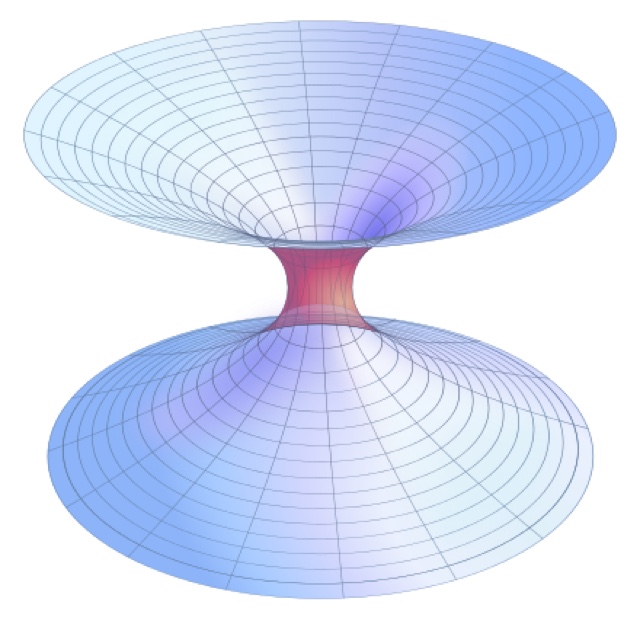 A few final notes:
Just to clarify. Although these items could have made the jump through the wormhole as long as 10 months ago, their return to the present was less than three weeks from initial discovery they were gone. It should be noted that after basic searches were completed, their quick return was precipitated by my expressing to a number family members that there was no critical immediate need for them.
This undoubtedly released the wormhole’s power to continue to transport them into the future.
Reader comments…
I think your correlation between need and distance into the future traveled is brilliant.
In my own research have certainly noticed that vocalizing an object is completely lost without hope of being found (in the manner of admitting defeat) often triggers the reappearance of the object forthwith. I suspect this has something to do with the humiliation of asking for help, however it could also be a result of sound wave disturbance.

4 thoughts on “A Brief Aside : Quantum Theory of Lost Objects.”